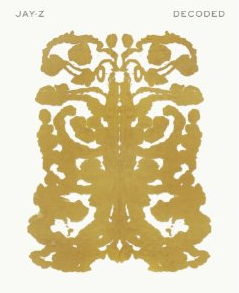 It seems like I’ve been hearing about Mr. Jay-Z a lot over the past several months — perhaps because he recently published his autobiography, Decoded,  and he’s been doing the circuit of talk shows to promote it. I heard a pretty good interview with him on Fresh Air late last year, and saw him in an rather awkward interview on Letterman some time ago. I haven’t read his book, but I admit it sounds interesting. It’s on my list of “music books” to read someday, right behind Keith Richards’ autobiography, Life, a good Lou Reed biography (any recs?), and Dylan’s Chronicles, Vol. II when it comes out. His compelling life story aside, what’s really standing out in my head these days about Jay-Z is a performance of “Empire State of Mind” he did on Saturday Night Live last year. Did you happen to catch it? It was one of those of too-few-and-far-between SNL music performances that left me thoroughly satisfied. Powerful. Good energy. I can’t find that clip on the net, but I did find this footage of the song on You Tube, and it’s just about as good. I think it’s rare to hear rappers and hip hop artists sound as good live as Jay-Z does. It’s a fine song, too.

Well, after publishing the Jay-Z entry I felt I ought to add another word and a clip from some hip hop all stars, taking me for a long ride in the Way Back Machine, who after all these years can still drop rhymes like nobody’s business. One of the commentators to this next video wrote: “Beastie + the Roots﻿ = Premature Ejac.” While I don’t agree with the results of this equation (and I’ve never seen the abbreviated “ejac” before!), I do agree that the Roots sound mighty awesome backing the Beasties.

5 thoughts on ““Better slip you an Ambien””