The Sea and Cake recently released their 10th LP, Runner (Thrill Jockey). And once again, these guys generated another gem. Frankly, it’s hard to believe this Chicago band has been making music for 20 years. Time and again, each release they put out has been musically deft, sonically inimitable, and carefully produced (though never overly so). 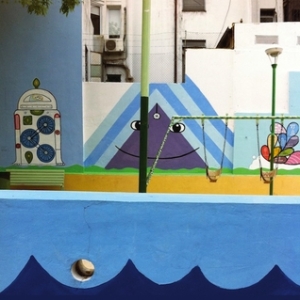 The Sea and Cake is John McEntire (drums), Sam Prekop (lead vocals, guitar), Archer Prewitt (guitar, vocals), and Eric Claridge (bass). Joe Tangari at Pitchfork hit the nail on the head in his review of Runner. The music these guys produce, he wrote,

occupy an indie rock niche all their own, and their utter consistency at turning out well-wrought, prettily cerebral records might help explain why they’ve never met a hype cycle that paid them any mind in spite of the quality of their music. Trends come and go, but the Sea and Cake are more or less constant, and have been for almost 20 years. Even when what they do comes into vogue, as it has a few times, they seem to be left out of the think pieces because they’re not new.

Nowadays when I flip through my LP collection or, more frequently given my current living situation, scroll through my iTunes catalog, I come back to The Sea and Cake’s music with regular frequency. I simply don’t tire of their sound, whether it’s the early stuff of 20 years ago (e.g., The Sea and Cake’s “Jacking the Ball” or Nassau’s “Parasol” are standards on my playlists), the mid-career cuts (e.g., Oui’s “Afternoon Speaker” and One Bedroom’s “Four Corners” and the Bowie cover “Sound & Vision”), 2007’s extremely solid Everybody (I’m honored to say that all of the members of the band signed my copy of this LP, and Archer Prewitt included a special banner of his comic book hero, Sof’ Boy, in the sleeve — fyi: we were living nextdoor to Prewitt’s sister in Kentucky at the time), or this latest album. From what I’ve been reading, Runner developed out of material from the band’s 2011 release, The Moonlight Butterfly. This is a short LP, but it nicely showcases the band’s dextrous muscianship. Here’s a tune, “Up on the North Shore,” which perfectly captures the classic Sea and Cake sound (plus, the “video” offers a slightly interesting photographic retrospective of the band).

The Sea and Cake song that’s really got my ear these days is “Aerial,” off the 2008 LP, Car Alarm. No video for this one, that I could find, but have a listen to the tune, and see if it catches you too.